BIOGRAPGY OF THE NEW PATRIARCH PORFIRIJE

The Holy Assembly of Bishops elected His Eminence Metropolitan Porfirije of Zagreb-Ljubljana, PhD, as the new Serbian Patriarch, in its convocation in Memorial Cathedral of Saint Sava in Belgrade on 18 February 2021.

Immediately after the election a thanksgiving service was officiated and  Many years was chanted to the Archbishop of Pec, Metropolitan of Belgrade-Karlovac and Serbian Patriarch Porfirije. Bells at Saint Sava Cathedral in the Vracar district of Belgrade rang a few minutes before 4:00 pm indicating that the 46th Patriarch of Serbia was elected.

Newly-elected Metropolitan Dr. Porfirije (Peric) of Zagreb-Ljubljana was born on 22 July 1961 in Becej, northern Serbia, and was baptized as Prvoslav. He finished primary school in Curug, and the “Jovan Jovanovic Zmaj” Grammar school in Novi Sad. He was ordained a monk according to the rite of small schime by his spiritual father, then hieromonk Dr. Irinej (Bulovic), at Decani Monastery in 1985.

He graduated from the Faculty of Orthodox Theology in Belgrade in 1986, when the then Bishop of Raska-Prizren Diocese, future Serbian Patriarch Pavle of blessed memory, ordained him a hierodeacon at the monastery of Holy Trinity in Musutiste, Kosovo and Mectochia.

He attended postgraduate studies in Athens from 1986 until 1990. That year, upon the blessing of Bishop Dr. Irinej of Backa, he joined the monastery of Holy Archangels in Kovilj, near Novi Sad, where he was ordained as hieromonk and became its abbot.

Many young monks and novices came to the monastery following him. These were the years when the Kovilj Monastery became a spiritual center for many young people: intellectuals, artists, popular actors and rock musicians, especially from Novi Sad and Belgrade. Since then abbot Porfirije has particularly dealt with drug-addicted patients. For this purpose he formed (in 2005) a therapeutic community called “The Land of the Living”, which is recognized as the most successful project for therapy  of drug-addiction; under the leadership of Bishop Porfirije, it has more than hundred residents in camps throughout Serbia at the time being.

During the ordinary meeting of the Holy Assembly of Bishops of the SOC in Belgrade on 14 May 1999 he was elected as Bishop of Jegar, Vicar of the Bishop of Backa.

He defended his PhD thesis  Possibility of knowability of God in St. Paul’s understanding according to the interpretation of Saint John Chrysostom at the Faculty of Theology of the University of Athens in 2004.

Bishop Porfirije has not been just president of the Steering Board for a decade, but a real spiritus movens of the Humanitarian Fund “Privrednik”, which has provided scholarships for a great number of gifted, but poor pupils and students, regardless of nationality or religious affiliation.

The Holy Assembly of Bishops entrusted him to establish military chaplaincy in the Serbian Armed Forces in 2010.

His expert theological works Bishop Porfirije published in magazines both in Serbia and abroad. He participated in quite  a number of scientific conferences and symposia throughout the world.

He was enthroned on the throne of the Metropolitan of Zagreb and Ljubljana on July 13, 2014 in the Cathedral Church of the Transfiguration of the Lord in Zagreb. The solemn Hierarchal Liturgy was served by Serbian Patriarch Irinej, accompanied by a large number of archbishops of the Serbian Church and other sisters Churches, as well as priests and monks, and pious people.

The Holy Assembly of Bishops elected His Eminence Metropolitan Porfirije of Zagreb-Ljubljana, PhD, as the new Serbian Patriarch, in its convocation in Memorial Cathedral of Saint Sava in Belgrade on 18 February 2021. Immediately after the election a thanksgiving service was officiated and  Many years was chanted to the Archbishop of Pec, Metropolitan of Belgrade-Karlovac and Serbian Patriarch Porfirije. 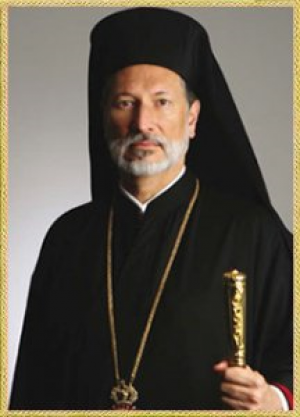 He was born in 1955 in Cleveland, Ohio, USA, to his father Djuro and mother Milica (nee Svilar). His elementary and secondary education was completed in Cleveland, Ohio. After attending the Cleveland Institute of Art from 1973-1975, he attended St Tikhon’s Orthodox Theological Seminary in South Canaan, Pennsylvania from 1975-1979, where he graduated with a Licentiate in Theology with the academic distinction maxima cum laude. In 1980 he enrolled in St Vladimir’s Orthodox Theological Seminary in Crestwood, New York and graduated in 1982 with a Master of Divinity degree with Honorable Mention for his master’s thesis Bishop Nicholai Velimirovich: A 1921 Mission to America. Following which, he entertained studies at the Athens Centre in 2000 and 2003 receiving levels I and II certificates in contemporary Greek language.

His Eminence Metropolitan Christopher of Midwestern America ordained him a deacon on 15 January 1994 at the Holy Resurrection Serbian Orthodox Cathedral in Chicago, Illinois. He was tonsured a monk on 18 January 1995 at the St Sava Monastery in Libertyville, Illinois, receiving the monastic name Irinej after St Irenaeus, Bishop of Lyons. Thereafter, he was ordained a hieromonk on 27 January 1995 at the St Sava Cathedral in Parma, Ohio, USA. He was elevated to the dignity of Archimandrite on 18 June 2006 by His Grace Bishop Justin of Timok (presently of Zhicha, a member of the Holy Synod of Bishops at the request of Patriarch Pavle.

Among his many appointments, it is important to emphasize that Bishop Irinej represents the Serbian Orthodox Church to the World Council of Churches (WCC) Central Committee; is a member of the Jasenovac Committee and the Permanent Missions Board of the Holy Synod of Bishops; the Advisory Council of the Njegos Endowment for Serbian Studies at Columbia University; and the Editorial Board of the Tesla Memorial Society; and the Communications Committee of the Board of Directors of St Vladimir’s Seminary; a member of the Serbian-American Center in Belgrade; and an honorary Board Member for ZOE for Life! He is the Episcopal Patron for the Milosh Obilich Society of Serbian Chivalry and the Centre for the Study of Orthodox Monarchism, both in Belgrade, Serbia; Protector and Spiritual Advisor of Australia and New Zealand for the Order of the Eagle of Georgia and the Seamless Tunic of Our Lord Jesus Christ and Chairman of the National Heads of Churches of Australia.

Previously, Bishop-elect Irinej was the Editor-in-Charge of the Information Service of the Serbian Orthodox Church; Executive Director of the Office of External Affairs of the Serbian Orthodox Church in the USA and Canada, located in Washington, DC; co-chaired the Orthodox Advisory Committee of the National Council of the Churches of Christ in Metropolitan Washington; was a member of National Council of the Churches of Christ Environmental Justice Task Force (NCCC Eco-Justice); and served on the Board of Directors of International Orthodox Christian Charities (IOCC); the Executive Council of The United States Conference of Religions for Peace (USCRP), the Conference of European Churches (CEC-KEK), the Serbian Unity Congress, the Mayor's Advisory Council on Immigrant and Refugee Affairs in Chicago, and the Chicago Human Rights Commission.

On the basis of the decision of the Holy Assembly of Bishops of 26 May 2006, the Reverend Hieromonk Irinej (Dobrijevic), Consultant to the Holy Synod of Bishops, was elected as Bishop of the Diocese of Australia and New Zealand. He was consecrated on 15 July 2006 in the Holy Archangel Michael Cathedral in Belgrade at the hands of His Eminence Archbishop Amfilohije of Cetinje, Metropolitan of Montenegro, together with 16 other bishops. He was enthroned on 21 October 2006 in the St Sava Pro-Cathedral in Elanora Heights, New South Wales by His Grace Chrysostom of Bihac-Petrovac, a member of the Holy Synod of Bishops, as Bishop of the Serbian Orthodox Diocese of Australia and New Zealand, with its see in Sydney. The following day, 22 October 2006, His Grace was presented as the Bishop-Administrator for the Diocese for Australia and New Zealand New Gracanica Metropolitanate at the St Sava Monastery in Wallaroo, New South Wales.

Having taken into consideration his significant diplomatic accomplishments, amongst all else, it was determined by the members of the Holy Assembly of Bishops that he be entrusted with the eminent Diocese of Eastern America with its See in New York City. The rebuilding of the St Sava Pro-Cathedral in Manhattan, recently destroyed in fire, will be the most formidable historic task awaiting the new Bishop as he assumed the Throne of the Bishops of Eastern America on 01 October 2016 at the hands of His Grace Bishop Longin of New Gracanica-Midwestern America in the Cathedral Church of the Holy Trinity in Pittsburgh. 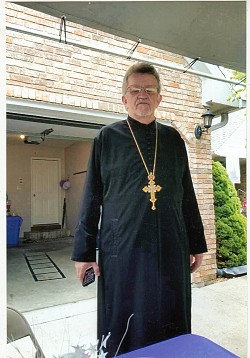 Fr. Petar Petrovic was born in the village of Riljac, Serbia, on St.Elijah, August 2, 1953. He attended with his parents the local Churh of St.Peter and Paul in the village of Poljna. He received a degree from the Theological Seminary of Belgrade, Serbia in 1973.

After completing his studies, Fr.Petar married Gordana Bojic in 1973, and was ordained by Bishop of Zicha, His Grace Vasilije Kostic. They have two sons, Fr.Dragan and Dusan Petrovic. Fr. Dragan is a Parish Priest in Indianapolis,he is married to Vesna and they have 3 children, Marija, Kristina, and Petar. The younger son, Dusan, is married to Lidija, and together they have two sons, Marko and Jovan.

Fr.Petar served as a Parish Priest in Serbia for 10 years.

In 1983 he and his family moved to Miami, Florida where he was a Missionary Priest, and served there as the pastor for 5 years. Following his service in Miami, he was transferred to Elizabeth, NJ., where he served for a couple of years. Fr.Petar allso served as a Parish Priest in Masontown, PA, Warren, MI, and Hotsprings, AR.

On December 1st, 2000,  His Grace  Bishop Longin assigned Fr. Petar as priest at St.George Serbian Orthodox Church in Cincinnati, OH. For the past 20 Years he has served at the St.George Parish in Cincinnati, OH. In addition to Pastoral responsibilities Fr.Petar has held a real-estate license for 15 years. He works for "SIBCY CLINE" Real Estate Agency.