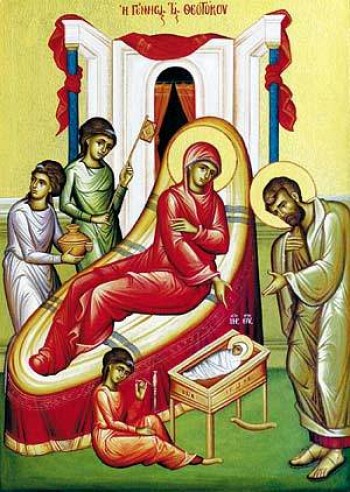 Our ladies of the Kolo Srpskih Sestara will celebrate their Slava, Mala Gospojina, on September 14. Won’t you please plan to attend?

As their name might suggest, the work of the Circle of Serbian Sisters flows much like the unending shape of a circle. Whether in the old Country, the United States, or anywhere else in the world, the Chapters of the women's association work tirelessly in service to their parish communities.

Our local Circle of Serbian Sisters organized 101 Years ago, is one o the pillars of our church community Their tireless fund -raising efforts have helped preserve our beautiful church and grounds. Their shining examples of volunteering   and devotion to the church help preserve our traditions and encourages us all to do what we can to be better Serbian Orthodox Christians.

We would be grateful if you bring some cakes. The First Kolo Established in the United States!

Milan and Darinka Mrvicin, with their children, came to Cincinnati from Kikinda, Yugoslavia in 1910. Knowing the important work that the Kolo Sisters had done in his homeland, Milan Mrvichin organized the ladies of the St. George Serbian Church in Cincinnati in a similar fashion.  The first Kolo organized in the United States, the Kolo was chartered by the State of Ohio in 1911. Darinka Mrvichin was elected the first President in 1912.  The Sisters chose as their patron saint Mala Gospojina (Nativity of the Holy Virgin).

From its inception, the Circle of Serbian Sisters, or Kolo Srpske Sestara (KSS) has been the backbone of the St. George Serbian Church, the supporting effort needed to accomplish the great things which have been accomplished in Cincinnati’s rich 99 year history. To quote from a historical article in the National KSS 40th Anniversary Commemorative Book in 1986,  “…..Over the years, the (Cincinnati) Circle has purchased utensils and supplies for the church kitchen , donated monetarily to the church on special occasions such as Slava, Christmas, Easter and whenever a need presented itself, furnished the Sunday School with necessary supplies, promoted and supported the Federation’s Summer Children’s Camps, and sponsored monthly covered-dish dinners to earn monies to continue its work. These dedicated Sisters, at the same time, were Church members, sang in the Choir and taught Sunday School.”

Below is a partial list of some of the Sisters who have held offices during these 97 years.  Our thanks to Katherine Zavisin, who joined the KSS in 1927, for this historical information.

The Sisters of Mala Gospojina Chapter look forward to continuing the dedication that was established for them more than 97 years ago. They will succeed in the future as they have succeeded in the past.

KSS National President, Mirjana Andjelkovic, and Midwest Region President, Slavka Fager, visited the very first KSS organized in the U.S., “Mala Gospojina,” of St. George Church in Cincinnati, Ohio for the celebration of their Slava in May, 2006.They were welcomed by the then-KSS President, Jeannette Djokovic; Church President, Cedomir Djokovic; and Parish Priest, Rev. Fr. Petar Petrovic, along with all their KSS members and church parishioners.

The Presidents’ visit was to honor and celebrate Mrs. Katherine Zavisin who, at 96, is the oldest living Kolo member in the U.S.   KSS “Mala Gospojina” was established in 1911, and Mrs. Zavisin became a member in 1927.

In recognition of Mrs. Zavisin’s long years of service to her church and KSS, Mirjana and Slavka presented her with a GRAMMATA from His Grace, Bishop Longin, and two beautiful icons from the National KSS.

An Honorary Member of “Mala Gospojina,” Mrs. Zavisin now lives in a retirement community.  Her daughter, Elaine Snyder, and son, James Zavisin, several grandchildren and great-grandchildren were on hand to share in her delight at her honor.  She is truly an outstanding example of the work and dedication of charter members of KSS and has our appreciation and gratitude for her commitment.”