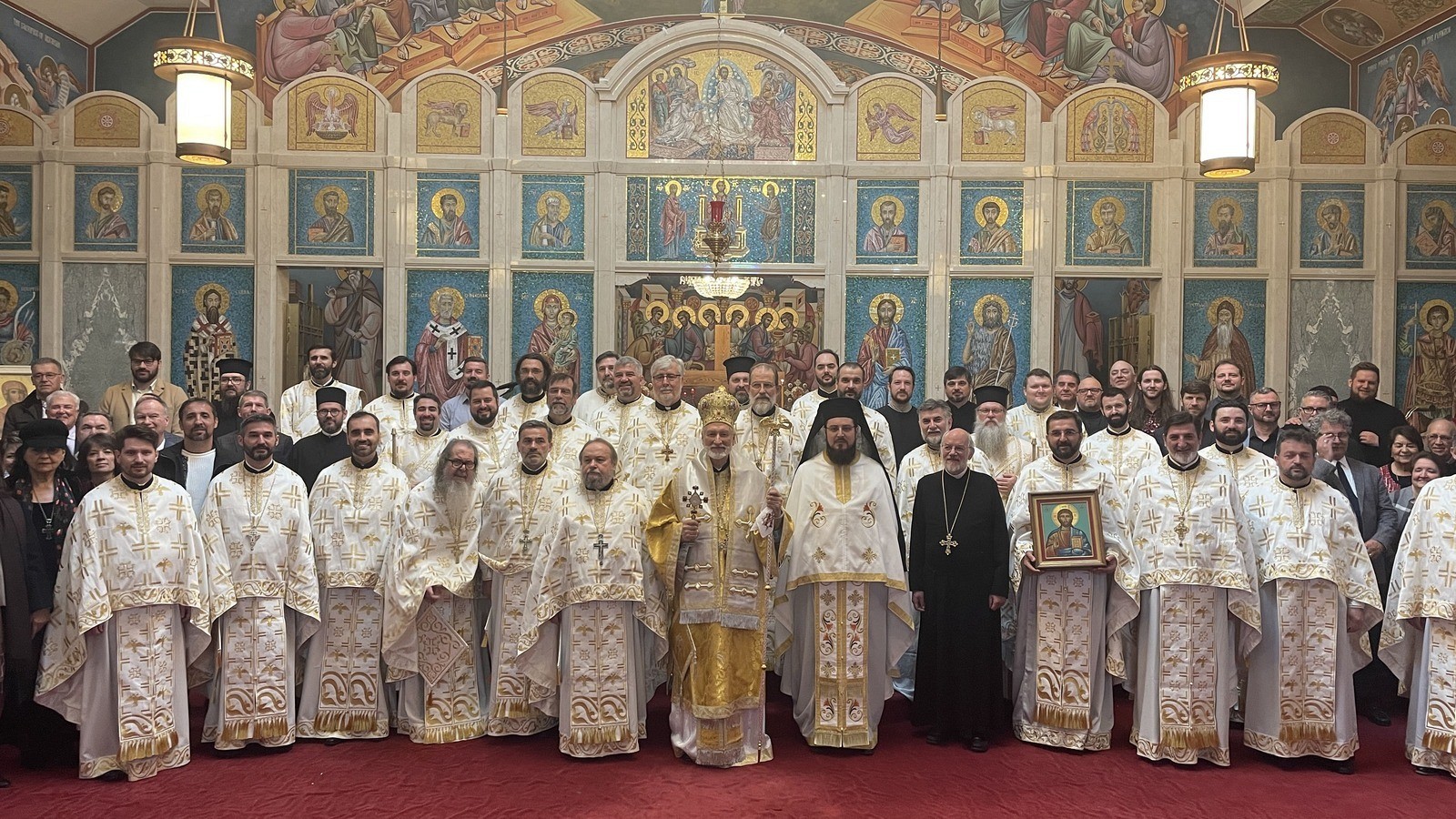 IN THE NAME OF THE FATHER, SON, AND HOLY SPIRIT!

We, the clergy, monastics, and elected representatives of the people of God,

delegates to the Annual Assembly of the Eastern American Diocese

of the Serbian Orthodox Church,

having gathered around our Bishop and Father, Kyr Irinej

at the Church of St. Nicholas of Myra in Lycia

in the God-protected City of Steelton, Pennsylvania

Being mindful of the sacred mission of the Church of God to joyfully bring the Gospel to the world, and heeding the elated voice of the Holy Apostle, “I will declare Your Name to my brothers and sisters; In the assembly I will sing Your praises” (Heb. 2:12), we have assembled in the celebration of the Divine Eucharist around our hierarch and bishop in the glory of the Holy, Consubstantial, Life-creating, and Indivisible Trinity to bring joy and comfort to the suffering world and to offer thanks to God for his loving kindness which He granted to us his faithful children.

We express our filial love and devotion to the Serbian Orthodox Church in the person of His Holiness, the Archbishop of Peć, Metropolitan of Belgrade-Karlovci, and Serbian Patriarch Kyr Porfirije. God grant him many years!

We greet the Holy Synod of Bishops, the Episcopal Council, and Central Church Council of the Serbian Orthodox Church in North, Central and South America. God grant them many years!

We are keenly aware of the indivisible and sacred unity of the Orthodox Church which is manifested in its sacraments. We are cognizant of the principles of Orthodox ecclesiology which teach us that each parish participates in the conciliarity – sobornost of God’s Church through its canonically appointed bishop as its father and hierarch. Thus, offer thanksgiving to God for the wise leadership of our bishop and father Kyr Irinej, through whose prayers, fatherly love, and pastoral care for the Serbian Orthodox Diocese of Eastern America, our churches, parishes, and monastic communities continued their salvific mission by offering service to God during the two difficult years of the devastating pandemic of Covid-19. God grant him many years!

It is with deep sadness, yet in the hope of resurrection into life eternal, that we remember the repose of Serbian Patriarch Irinej, Metropolitan Amfilohije of Montenegro and the Littoral, Bishop Milutin of Valjevo, Bishop Atanasije formerly of Herzegovina, Bishop Lavrentije of Shabac, Bishop Luka of Western Europe, and all clergy, monastics and laity that have entered into blessed repose from 2020 to the present day. Especially, we fondly remember the departed priests of our Diocese, protopresbyters-stavrophores Dragoljub Malich and Adam Yonitch, as well as Nun Varvara (Keselj) of New March Monastery. May their memory be eternal!

Relative to the war in Ukraine, as a people who not long ago suffered from many atrocities of war and injustices of armed conflict, with prayerful trepidation we echo the words of our Patriarch, “Every war is a tragedy, and for us it is a painful fact that two fraternal states and two completely close brotherly peoples of the same faith, whose history and culture are inextricably intertwined, are in conflict. Hence, every casualty is a loss for everyone. The Serbian Orthodox Church prays to God the Peacemaker, that the use of weapons ceases as soon as possible, and a dialogue begins on overcoming the crisis.”

WHEREAS the Department of Christian Education has announced its long anticipated plan and program for a bi-lingual Church School Curriculum for Grades 1-8 of the Church-School Congregations of our Diocese and has successfully collaborated with the Giolas Foundation to provide school supplies for children in Kosovo and Metohija;

THEREFORE, LET IT BE RESOLVED that the members of the Assembly express our support and appreciation to Protodeacon Dr. Jovan Anicic, the Director of the Department of Christian Education, and his coworkers, who will see it through to its publication and distribution.

WHEREAS the faithful of the Eastern American Diocese have made generous donations to the Diocese of Rashka-Prizren, which have been matched by the International Orthodox Christian Charities (IOCC) to support schools and agricultural development in Kosovo and Metohija;

THEREFORE, LET IT BE RESOLVED that the entire Serbian Orthodox Diocese of Eastern America is unanimously voicing our resolute and unwavering support for the Diocese of Rashka-Prizren in Kosovo and Metohija expressing our deep gratitude to the IOCC and the Chairman of its Board, Jasmina Boulanger, for their selfless act of charitable love exemplified in matching the donated funds.

WHEREAS in the past year, our Father and Bishop Irinej sent three separate written interventions to U.S. Secretary of State concerning the assaults on the clergy, monastics, and temples of the Serbian Orthodox Church in Kosovo and Metohija, which constitute perpetual violations of basic human rights, drawing special attention to the persecutions of Monastery Visoki Dechani and the Serbian Orthodox Church in Prishtina;

LET IT BE RESOLVED that we unwaveringly join the Serbian patriotic organizations in America – Serb National Federation, the Serbian National Defense Council, and the Serbian-American Leadership Conference – together with the Crown Prince Alexander II of Serbia in applauding the efforts of our Bishop in safeguarding our history and patrimony in Kosovo and Metohija. We are keenly aware that those sanctuaries, together with religious and cultural monuments, belong to the history of all Serbs throughout the world and we are proud to have that venerable history as our own. The Serbian Orthodox Diocese of Eastern America will continue to vigorously voice concerns and will continue to expect American authorities to condemn the ethnic persecution of Serbs. We the faithful of the Diocese of Eastern America support Bishop Irinej’s calling on the American authorities to consider imposing sanctions on those who perpetuate the historic injustice that inhibits reconciliation and destabilizes the region of Kosovo and Metohija.

WHEREAS five years have passed since our Father and Bishop Irinej has been elected and enthroned to the See of Eastern America; and recognizing his efforts and the fruits of his labors in:

THEREFORE, LET IT BE RESOLVED that together with our Hierarch, the Diocesan Family is proud of the many accomplishments in the last five years, including the spiritual and liturgical growth, an increase in the ranks of the clergy, frequent liturgical celebrations among the Orthodox jurisdictions, formalizing the fulfillment of civil and canonical expectations in the administrative and legal requirements of our country, advocating for the Serbian Orthodox Church through the government of the United States and through the United Nations, acquiring a fitting Episcopal Residence and Diocesan Center, working towards the rebuilding of the See of the Diocese at the St. Sava Pro-Cathedral in New York, and earning the Lucy G. Moses architectural award from the New York Landmarks Commission.

We thank all those who labor on behalf of our Diocese and the hosts of the Assembly, Presbyter Christopher Rocknage and the parish family at St. Nicholas Serbian Orthodox Church in Steelton, Pennsylvania.

We offer thanks to God in His Saints for their abundant mercy and grace which they bestow upon our Diocese of Eastern America of the Serbian Orthodox Church, under the leadership of His Grace our Bishop Irinej. We continue to strive and pray for our unity and harmony as a community of believers, fervently beseeching of God that we always remain bound together in love as a Diocesan Family and that our God, Who loves humankind, will always look favorably upon us, as we move forward, ever progressing, yet always remaining the same, but never stagnating. We thank God for our Fatherland from which we herald, and for our Homeland, the United States of America, in which we live and freely worship.